Some plants from Shotover Saddle

Last week I went to Shotover Saddle in West Otago with Dr Heidi Meudt (Museum of New Zealand botanist).  We were collecting samples of Veronica and Myosotis for Heidi’s research, and I was there because I’d been before and knew the route.  Heidi is investigating the relationships and evolutionary history of these plants, using some of the latest DNA-based techniques.

It’s a long slog from the West Matukituki River to the top.  We were lucky because we had a rented four wheel drive and permission from Mt Aspiring Station to use the road beyond a locked gate.  Even so it was a long and tiring day.
The only soul we saw all day was this paraglider pilot who flew along the ridge just above us.  We were told later he'd probably taken off from Treble Cone, near Wanaka. 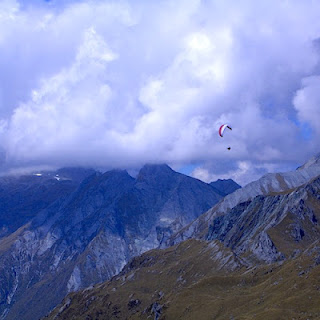 The saddle (a common term in New Zealand for a pass or col) is the main access from the Matukituki to the head of the Shotover River.  It’s in Mt Aspiring National Park, so all our collecting was under permit from the Department of Conservation.
Our main quarry was Veronica planopetiolata, a small glossy mat-forming plant of high altitude (1750m) scree, boulder field, and rock crevices.  It’s probably common enough in the Park and nearby, but not often collected.  When I did my PhD thesis (1975) on this group of Veronica, then classified as Parahebe (and here's an explanation for the change), I tried many times to collect some of this plant, but I never saw it in the wild until 2006.  It’s interesting because it’s tetraploid (has 4 sets of chromosomes instead of the usual 2), suggesting the possibility of a hybrid origin in its distant past.
Most of the plants had white flowers, but some were pink (this photo was taken on my previous trip). 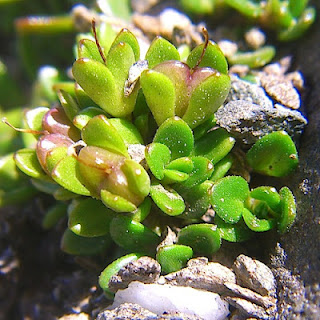 Veronica planopetiolata, like a lot of cushion-forming veronicas, has seed capsules that open when they're wetted by rain, and the energy from falling rain-drops splashes out the seeds.  My former student Gesine Pufal showed they don't disperse very far, and she concludes it's a way to restrict dispersal in plants that grow in very small habitat patches (Pufal et al., 2010; Pufal & Garnock-Jones 2010).
This is quite a common plant on the scree below Red Rock, and in rock crevices and gullies nearby.  I’d expect it to be common at higher altitudes on Mt Tyndall and beyond, but getting up there is beyond my capabilities.
Other veronicas in the area include a hairy cushion snow hebe, V. thomsonii, a shrubby hebe (V. subalpina), and a whipcord hebe, V. hectorii.
The daisy or sunflower family Asteraceae is well represented in many parts of the New Zealand mountains.  The family includes a number of large groups, each of which appears to have evolved many species from an original founder.  There were more species than I’m showing here.
The Senecio tribe was represented by Dolichoglottis scorzoneroides and Haastia sinclairii, both of which are part of the Brachyglottis radiation in New Zealand.  Both these species had ancestors that were probably shrubby daisies.
The Aster tribe was represented by a large number of alpine daisies of the genus Celmisia.  Many Celmisia species appear to have wide distributions, so that on any one mountain there are often a large number of different ones, compared to Veronica, which has more species, but more localised distributions.
The New Zealand edelweiss has very similar flower clusters to its famous European namesake, but it’s classified in a separate genus and appears to have reached its similarities independently.  There are four species.  It’s much more closely related to other New Zealand genera in the Raoulia complex.
This woolyhead (Craspedia) is one of a baffling group of New Zealand plants.  Such is the variation in this group that botanists think there are a few dozen species still to be described and named.  There’s a lot of work to be done before we know this group in detail, and all the tools in the botanist’s toolbag will be needed to sort out the mess.
Wahlenbergia albomarginata, southern bluebell is a common plant throughout New Zealand (the North Island W. pygmaea is likely to be the same species).  It was common from the river bed up to Shotover Saddle, growing in grasslands, fellfield, and rock outcrops.
Schizeilema is a small genus quite closely related to the giant Stilbocarpa of the subantarctic islands.
A couple of mountain foxgloves were also of interest, because this group was the subject of Heidi’s PhD and several papers since.  This one is O. glandulosa.
We saw two Myosotis (forget-me-nots), but only were able to collect one, because the other was just a single plant.  Myosotis pulvinaris is a cushion plant that looks superficially very like Veronica thomsonii.  The Myosotis differs in its bigger leaves and some details of the form and distribution of its hairs, and of course their flowers and fruits are quite different.  New Zealand forget-me-nots mostly have white flowers or sometimes yellow ones.
References